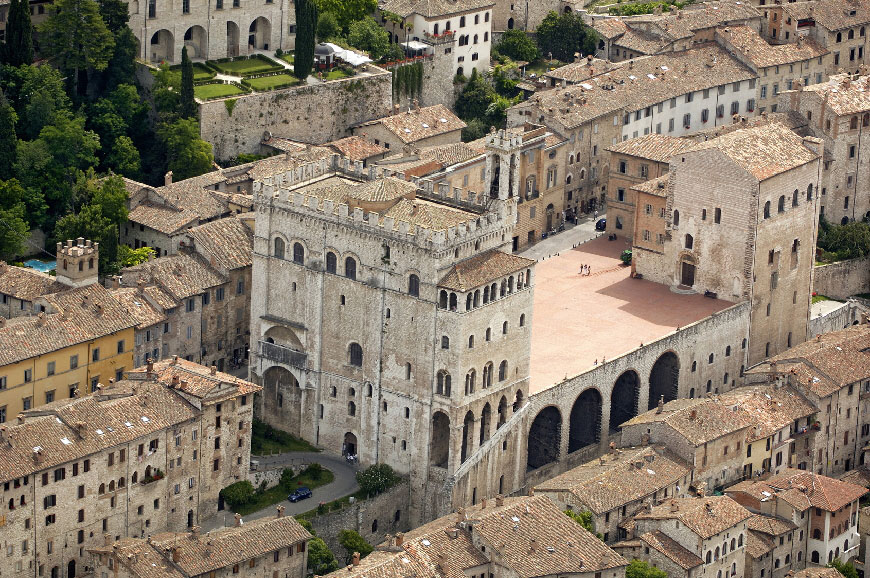 Fascinating even in how it clutches onto the slopes of Monte Ingino, Gubbio is one of Umbria's oldest towns, as witnessed by the Tavole Eugubine, some of Italy's most important ancient documents, and the Teatro Romano that is just outside the walls. The city presents a rather simple urban plan, five parallel streets at different levels that follow the contour of the mountainside and are interconnected by alleys and steps.
The magnificent monuments that recall the past powers of this marvelously preserved one time city-state form the background of these intertwining medieval streets. The most important and very suggestive building, Palazzo dei Consoli, built at the end of the 14th century and once representative of communal authority, is now a museum. Opposite, the Palazzo Pretorio, another 14th century building, since subjected to much remodeling, is now used as theMunicipio [City Hall]. Also worth notice are the Palazzo Beni and Palazzo del Bargello, and the famous 16th century Fontana dei Matti [Madman's Fountain] comprising a fountain with a pool (according to tradition, whoever circles the pool three times merits the title 'Madman of Gubbio'). A steep fascinating street lined

with centuries-old buildings leads to the 14th century gothic style Duomo and the facing 15th century Palazzo Ducale. Also of great interest are the Cathedral, the churches and convents of Santa Maria Nuova and Sant'Agostino (with the remarkable frescoes of Ottaviano Nelli), and the churches and convents of San Francesco, San Giovanni, San Pietro, and San Domenico.
The monumental Basilica di Sant'Ubaldo overlooks Gubbio from its position higher up Mount Igino; this can be reached either by the easy road through the woods or by cable car that departs from near Porta Romana. The unspoiled remains of the patron saint are kept in custody in the Basilica and his feast day, May 15th, is celebrated with a colorful and exhilarating race (Corsa dei Ceri) during which hundreds of the city's inhabitants carry three large candles, weighing more than 400 kilograms each, from the city to the Basilica. Another important event that evokes a truly medieval atmosphere is the Palio della Balestra, the crossbow contest between Gubbio and the Tuscan city of Sansepolcro; a centuries-old tradition, the contest is held in the piazza Grande the last Sunday in May.

One of Umbria's oldest towns, perched high on a hill:
> Gubbio

The most livable town in the world, according to an American researcher:
Todi

Orvieto sits in a spectacular position on top of a cliff and has a complete hidden, medieval part of the city underground:
Orvieto

Going up through woods full of evergreens one reaches the pastures on the summit (1,566 meters) that presents a splendid view over the plateau of Gualdo Tadino and the Gubbio mountains. 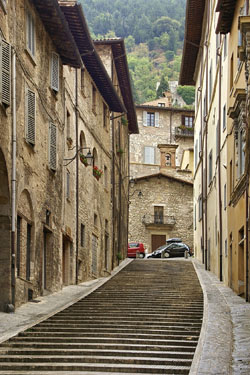 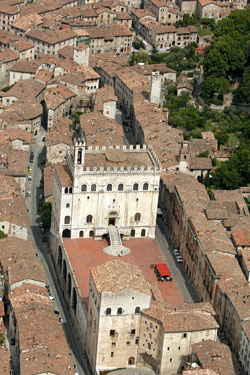